Speaking of ballistic gelatin, you may also like Ballistic Gel: Purpose, Protocol, & Best Ones.

The Revolver Guy details the complete history of the development of the S&W L-Frame revolver.  If you are a revolver fan, you might also like the article highlighting the artistry of Dwayne Worley’s Grips.

Teach your children to shoot

Claude is correct.  Teaching your children to be able to pass the OPOTA rifle qualification (even if only using a .22) would be an excellent goal.

A good video for those of you who want to start tinkering with your 1911 pistols.

How Far Can a Slingshot Shoot?

In my misspent youth, I killed a lot of rabbits, squirrels, and groundhogs with ball bearings shot out of a slingshot like this.  I think the utility of slingshots as a survival tool are underestimated.

I Was Wrong… This Belt Will Work as a Tourniquet 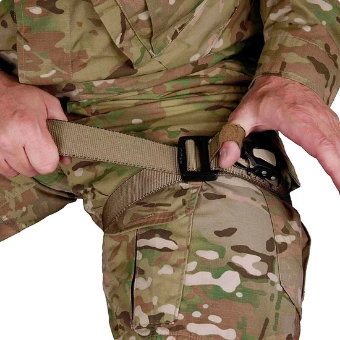 Belts are not good improvised tourniquets.  But a belt that is actually designed as a tourniquet might be something different.  I still think it isn’t the brightest idea, but the product appears to be well made.  Please keep in mind that this one does not have the TCCC endorsement.

This article may provide a much needed dose of reality for those of you with “bug out” plans.

Nearly Every USGS Topo Map Ever Made. For Free.

If you are planning on “bugging out” to a remote location on public land, it might be a good idea to download some topo maps of the area beforehand.   This site has almost all of the USGS topo maps in a free downloadable format.

Some shooting drills to try at your next training session.

The basics of treating cellulitis in austere conditions.

“So instead of trying to just get it over with, focus on staying safe first, and only then take the next step. Don’t lose, because as long as you have not lost, you have a chance of winning.”

Doug Casey is an interesting fellow and has a unique anarchocapitalist worldview informed through travel in more than 150 different countries.  His fictional books series attempts to impart serious worldly wisdom under the guise of fiction.  I enjoy all his stuff and think a lot of you will as well.

To get a better idea about how the author thinks, listen to his recent podcast interview with James Howard Kunstler.

People like Tom Givens have long made the point that a major factor in the generally decreasing homicide rate isn’t that there is less crime, but instead it’s that our medical care has significantly improved.

I just found a study that actually quantifies exactly how big of a role modern medicine has in reducing our murder rate.

“Murder rates would be up to five times higher than they are but for medical developments over the past 40 years…Without this technology, there would be no less than 50,000 and as many as 115,000 homicides annually instead of an actual 15,000 to 20,000”

What’s of further interest to me is that the research is almost 20 years old. I wonder how much more medicine has improved since the study was published?

Steel cased ammo might be the only thing you can find right now.  Will it hurt your gun?  Probably not.  With that said, I shoot steel case in my AK-47 rifles, but generally avoid in in my ARs and handguns.

Good tips for those of you who carry a gun in your pocket.  I occasionally pocket carry a J-frame snub, a Ruger LCP, or a Glock 42.  The two holsters I’ve found that work the best are the DeSantis Superfly and the Tuff Products Pocket Roo.

Arguments for carrying a second gun.  You might want to even keep a third carry gun.

Good advice for anyone trying to introduce their girlfriend to shooting.

I first did this drill in an NRA LE instructor class taught by the late Clive Shepherd back in 2001.  Everything old is new again.

It’s a useful exercise and can also be done with range picnic tables.  If you want to be exceptionally evil, put a student on either side of the picnic table.  Make them use their near side hand to hold the picnic table off the ground while they shoot their rifle with the other hand.  Then switch sides.  Your students will hate you, but will learn things.

Once you can shoot…

Claude shares some excellent information on his Patreon page.

“If we simply compare the number of wins for each category, you may get the impression we’re bigger fans of the RDS + magnifier than the LPVO. But that’s not the case; both are excellent tools when used properly. The LPVO allows for engagement at greater distances with greater precision, while the RDS is better for close range, funny angles, and NVG use. As manufacturing technology increases, gaps between these systems will continue to diminish — and that’s a good thing.”

You may also enjoy Everything Wrong with LPVOs

Masks and Respirators for Covid 19

Morgan Atwood provides you with all the information you need about masks.  You should also read What If We Are Hit By Another Pandemic?

and How to Spot a Counterfeit N95 Mask.

From the Archives: 1928 pistol training for bank tellers

“They aim to welcome bandits with hot lead.”

More than 100 officers and managers of banks and their branches attended a demonstration school for the protection of banking institutions against hold-ups at the police pistol range in Elysian Park yesterday afternoon. Chief of Police Davis was in charge.
With a special teller’s cage which had been erected on the range, and dummies placed in front, two blindfolded to represent the bandits and the rest customers of the bank, it was demonstrated how two bank employees could cover the bandits and shoot if necessary without harming any of the patrons. Experts of the police department explained with practical illustrations the methods of protection to be used.

With the co-operation of the banks, employees will be given a course of instruction in the accurate use of pistols and methods of action to be pursued in time of hold-up. Training in handwriting and identification work to aid in apprehending check passers also are included in the course. Following the demonstration, the visitors were guests of Chief Davis at a barbecue at the range.”

My how times have changed.  H/T to Michael deBethencourt for posting the link.

For some more history of this era, check out A Look Back: Lawmen and Special Agents of the Gangster Era.

Have you considered the fact that your attacker may be a pre-teen?

Ralph is one of the original deep thinkers in the firearms training field.  His book is a useful addition to your library.

A few ideas to improve your family’s safety.

“Don’t Run in a Straight Line” and other Bad Advice